The three Christmas specials were highlights of any Story Teller fan's year growing up in the 80s. Now, here's the fourth Christmas special with stories, poems and carols guaranteed to make you all jolly and festive. 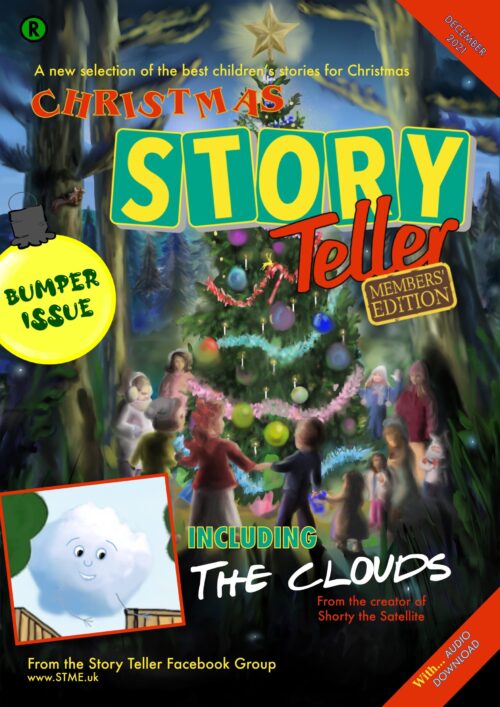 By popular request, Christmas STME recaptures the spirit of the original three Christmas Story Teller specials. Christmas STME has the same ingredients of classic and new tales, poems and carols. Old favourites Santa and Rudolph return for another misadventure while The Little Match Girl and Ali Baba provide that classic flavour that everyone loves. The result? A Christmas treat for everyone to enjoy for many years to come!

How to enjoy Christmas STME

Click on “View Flipbook” and it will open in a new window. You can read it on its own or play and listen to the audio at the same time by clicking on the playlist further down this page.

It is my hope that Christmas Story Teller: Members’ Edition will cast the same spell that mesmerised readers of the original Christmas Story Teller. It gathers the endless talents of members of the Story Teller Facebook Group, stirred together by Abigail the Spider’s magic wand to create another collection of children’s Christmas stories. Traditional characters such as the Little Match Girl, Ali Baba and Santa and Rudolph join an exciting host of new ones to bring you jolly adventures to delight the young and old over the Christmas season.

I thank those whose passion and love for Story Teller made this special Christmas edition possible: the writers and editors, narrators, audio technicians and art designers. A special “thank you” goes to Anth Ginn, creator of the popular Shorty the Satellite stories in the original series, as he presents us with another memorable tale in this Christmas issue. I am also grateful to Eaglemoss Collections for their continued support of the Members’ Edition, and for allowing us to keep the Story Teller magic alive.

Wishing you all the Christmassy magic,

Christmas Story Teller: Members Edition
Update Required To play the media you will need to either update your browser to a recent version or update your Flash plugin.

The First Noel
This traditional English Christmas carol has Cornish origins. As its title suggests, it tells of Jesus’ birth and the visitors that find their way to that famous stable.

The Little Match Girl
One of Hans Christian Andersen’s most poignant fairy tales, the Little Match Girl tells of a dying child’s dreams and hopes. It is a seasonal reminder that for some, Christmas is not a time to be merry or joyful.

Santa’s Late Christmas
In this sequel to Geraldine McCaughrean’s charming and amusing Santa and Rudolph stories in the original Story Teller, every child’s nightmare comes true: Santa finds himself unable to deliver presents on Christmas Eve!

Ali Baba and the Forty Thieves
The popular Arabian Nights tale with that world famous magic phrase: open sesame! A poor woodcutter discovers a thieves’ den and foils their attempts to kill him.

Fit for a Princess
Princess Annabel splashes her sister Princess Emily’s gown with paint to prevent her from going to the ball. A mysterious old lady helps Emily and teaches Annabel a lesson at the same time.

The Clouds
Anth Ginn, creator of Shorty the Satellite, gives us more memorable characters in this story about a boy who teams up with a cloud to find a missing sister and beat the bullies.

The Red Nosed Reindeer
Rudolph is Santa’s most famous reindeer, but did you know that he was not always part of Santa’s elite team of heroes who deliver presents to children all over the world every Christmas Eve?

The Carol of the Bells
When a family of church hand bells find themselves no longer wanted and packed away in a cupboard, family unity and harmony prove to be the way back to people’s hearts.

Hop’s First Christmas
In this seasonal poem by Sal Patrick Bates, we experience the magic, excitement and wonder of Christmas, as seen through the eyes of a young rabbit.

Lofty Ideas
Story Teller gets a new feline hero! When Cleo an elderly cat finds herself trapped in the loft, help comes from an unexpected source.

A Merrie Olde Christmas
A Christmas adventure with the residents of Sherwood Forest. When Will is captured by the Sheriff of Nottingham’s men, Robin and Rebecca go to the rescue.

A Magic Christmas for Katie
When Katie’s parents decide that they should spend Christmas in India where it is hot and never snows, she is sure she is in for an unexciting Christmas. A wizard makes her realise that Christmas is more than about snowflakes falling on the day.

O! Holy Night
Based on a French-language poem, this English version is written by John Sullivan Dwight and it reflects on the birth of Jesus as humanity’s salvation.